You are here: Home / About Annai Velangkanni

Annai Velangkanni is from the Tamil language where “Annai” means Mother and “Velangkanni” comes from the name of a village in coastal Tamil Nadu (South India), namely Velankanni (the British colonial masters spelled it as Vailankanni), a village that is believed to be where the Virgin Mary appeared in the 16th century. The Indonesians pronounced “Velankanni” as in “Velangkanni” and hence was adopted as the official spelling of the Shrine to distinguished it from the shrine in Tamil Nadu, India. So in Indonesia Annai Velankanni Arokia Matha (Lady of Good Health) is known as Bunda Velangkanni Bunda Penyembuh Orang Sakit.

The Basilica of Annai Velankanni in Tamilnadu (India) is built in the Gothic style and its founding is attributed to the two apparitions of Our Lady in the 16th century and the saving of the Portuguese sailors from a tempest in the Bay of Bengal in the later 17th century. 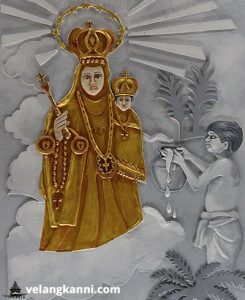 The first apparition is said to have occurred in the mid-sixteen century, when a local Hindu shepherd boy was performing his usual duty of carrying milk from Vailankanni to his master at Nagapattinam. Despite the morning freshness, fatigue overcame him as he was passing by a water pond at the Anna Pillai street at Vailankanni. Placing the milk-pot under a Banyan tree by the water pond, the boy fell into an unusual slumber, only to be startled to his feet by the sweet vision of a beautiful Lady holding in her hand a most charming child of divine appearance. As the boy was still taken by surprise, the Lady asked for some milk for her child which the boy then reverently offered.

On reaching the master’s home, the boy apologized for his lateness and the reduced amount of milk by relating the incident that occurred on his way. The impatient master did not believe the story of the boy. But to the greater astonishment of all present, the milk began to surge over the pot and flow out. Realizing that something miraculous had happened, the master, wanting to see the place where the apparition occurred, accompanied the boy to the place. When they reached the place, Our Lady appeared once again to the boy, but the master could only see a bright glittering light. The master and others began to believe in her appearance and the place where the apparition took place began to be called Matha Kulam (Our Lady’s Tank). 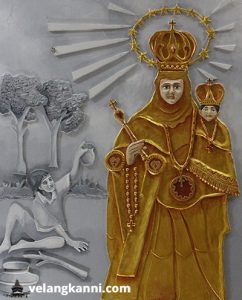 The construction of a chapel in honour of Our Blessed mother is attributed to the second apparition, not the first. The second apparition is said to have happened a couple of years later, where a poor widow and her lame son lived in Vailankanni. Every day the lame boy used to sit under a banyan tree at a place called Nadu Thittu (central mound) and sell buttermilk to the thirsty wayfarers. One day, a very bright light appeared in front of him and from amidst the light, a Lady of peerless grace with a divine Child in her arms, asked the boy for a cup of buttermilk and the boy complied.

Then She directed him to go and inform a certain wealthy Catholic man in the nearby town of Nagapattinam of her appearance and put up a Chapel in her name on the spot of her apparition. The boy realized that his legs had become normal upon the word from the Lady. With great joy, he ran to Nagapattinam to carry out the errand.

With the willing cooperation of the people of that locality whose enthusiasm had been kindled by the miraculous healing of the widow’s crippled son, the Catholic gentleman of Nagapattinam soon put up a small thatched chapel at Vailankanni. An altar was erected in the chapel and a beautiful statue of Our Lady of Vailankanni holding the Infant Jesus in her arms, was placed on the altar. This Nadu Thittu chapel marked the humble beginning of the Shrine of Our Lady of Vailankanni and became a holy place of veneration to Our Blessed mother and She was called henceforth Arokia Matha (Mother of Good Health). 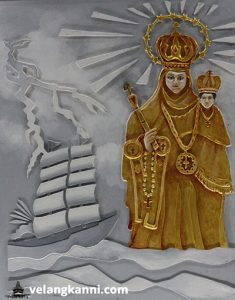 The third incident occurred in the 17th century, when a Portuguese merchant vessel was caught in a giant storm in the Bay of Bengal as it was sailing from Macao in China to Colombo in Ceylon. The helpless sailors, then at the point of desolation, prayed fervently and invoked the help of the Blessed Virgin under her title Stella Maris (Star of the Sea) to save them. They vowed to build a Church in her name, wherever they could land on.

The stormy sea became calm. Their ship landed near the shore of Vailankanni on the 8th September, the Feast of the Nativity of Our Lady. Fulfilling their vow, the Portuguese sailors transformed the thatched Chapel erected by the catholic gentleman of Nagapattinam into a beautiful stone-built Chapel.

On their next visit, they decorated the Altar with porcelain plates, illustrating biblical themes. These plates giving testimony to their thanksgiving to Our Lady, are seen even today around the throne of the miraculous statue of Our Lady of Good Health, over the main altar of the Shrine Basilica. From that time the Feast of Our Lady of Good Health is celebrated every year preceded by hoisting of the flag on August 29th.

Although all three apparitions ultimately resulted in the erection of a shrine to our Lady, it was the promise of the Portuguese sailors that was the proximate cause of a permanent edifice being built at Vailankanni.

More than 400 years later, the eleven-day festival and celebration from 29 August to 8 September is still observed and draws nearly 3 million pilgrims each year. The Shrine of Our Lady of Vailankanni is one of the most frequented religious sites in India, where Hindus, Muslims and Christian from all over India congregate in large numbers and worship in harmony. Hundreds of miraculous cures are reported every year.

Centuries of devotion to Mother Mary both by Hindus and Christians have evolved an amalgamation of practices borrowing elements from both religions. Amongst these include the practice of tonsuring their heads as an offering and also perform ear-boring ceremony, bathing in the sea, walking on knees or rolling in the shrine as a ritual. It is also common to find traditions of offering a candle in the shape of the respective ailment – a heart in case of cardiac complications, a liver in case of jaundice, lungs in case of tuberculosis and so on. In case of the ailment getting cured, many bring with them small gold and silver replicas of parts of the body that has been cured to donate to the church.

Lourdes of the East

The apparitions of the Blessed Mother Mary in the 16th century in Vailankanni, India and in course of time God had sanctified the place through innumerable miracles through Mary’s powerful intercession to become a national and international center of pilgrimage for the past three centuries.

True to the immortal wisdom and the persuasive words of Gamaliel, a Jewish expert in Law to the Sanhedrin, which wanted to nip Christianity in its bud, ” …. If this endeavor or this activity is of human origin, it will destroy itself. But if it comes from God, you will not be able to destroy them; you may even find yourself fighting against God… (Acts. 5:38) “, devotions to Annai Velangkanni have proved it to be of divine origin.

His Holiness Pope John the XXIII, raised the Shrine to the status of ‘Basilica’ on the 3rd November 1962 and called it the “Lourdes of the East”. The apparitions of Our Lady, the Miraculous statue of Our Lady, the countless miracles, the magnificent architecture and beauty of the Shrine, were the motives for this Shrine to become a Basilica.

Documentary Film – Vailankanni The Lourdes Of The East