The architecture of this shrine is totally different from the norm. A typical church consist of a Christian cross attached to the top of the building. Rarely do you find components of another religion on its architecture. However, that’s what you’d find in the Graha Maria Annai Velangkanni. At a first look it doesn’t look like a church at all! 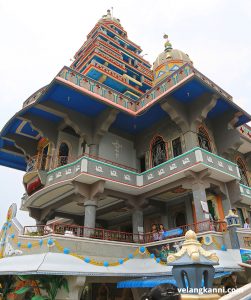 When you see this shrine from some distance it looks more like a Tibetan style Buddhist temple, due to the presence of both Indian and Chinese characters on the building’s architectural design. The building itself was designed in an Indo-Mughal style. The combinations of brown, grey, and red colors on the building, and its pyramidal pagoda on top, give you the impression of a Buddhist or Hindu monastery somewhere in India. In addition, the two winding staircases (one on the right, and one on the left side of the building) leading you to the second floor, resemble the palaces you can see in the Forbidden City in Beijing, China!

All these religious symbols adorn the building in a harmony with the structure of the shrine and form a beautiful unity. Aesthetic and religious values blend in to express the loftiness and the great mystery of the divine majesty. 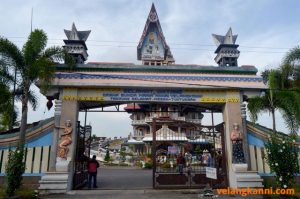 As you enter the main gate you will not fail to notice the inculturative welcome of North Sumatra Rumah Adat (the traditional houses of Tobanese and Karonese of Batak Tribe), adorning the entrance top. Also on the top is a relief of Msgr. A.G.P.Datubara, the former archbishop of Medan, welcoming the visitor.

The sculptures of people of different races and cultures of Indonesia on the walls surrounding the Graha Maria symbolizes unity among the people of God; and also symbolizes that anybody and everybody irrespective of faith or culture are welcomed to this Oasis of Christian Spirituality and Healing. 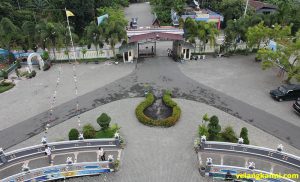 The visitor could immediately feel that he is entering a pilgrimage center which is “a place of Welcome and Encounter of God with His people” as he sees the asphalted road in the form of man falling in prostration before the majesty of God and the two ramps that lead to the second Floor where a huge statue of Annai Velangkanni with her baby Jesus stands, look like the two arms of Mary receiving the visitor with a motherly embrace. The two ramps have become a symbol of the hands of the Virgin Mary embracing humanity with love. 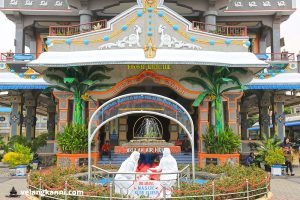 The shrine is an evangelizing edifice to tell the story of Salvation History of mankind, based on the Bible and the teachings of the Church through its format, symbolisms, ornaments sculpture and paintings. Going around the Shrine complex, one is made aware that the whole teaching of the Bible both the Old and New Testament has been depicted through the various paintings, carvings and writings in and around the shrine. Just like it used to be in Christian Europe, the medieval cathedrals were known as the Biblia Pauperum (the poor man’s bible). The shrine itself becomes as a catechism teacher and proclaims the history of the Salvation. One misses this catechism type character in so many modern churches.

The Steeple and Domes 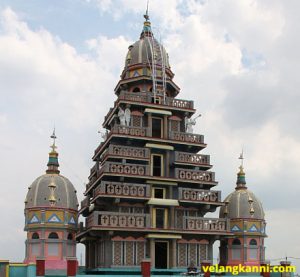 The shrine consist of two floors: A meeting place (community hall) on the ground floor and a place of worship on the first floor and seven storey steeple with triple domes. The seven storey steeple is tallest part of the building and is representative of Hindu architecture. The number ‘Seven’ represents ‘heaven’ according to Western as well as Hindu and Muslim cultures. The 7 storeys in Hindu architecture represents Raja Gopuram (the king’s dome) to show that the building is majestic. This 7 storey steeple symbolizes that in heaven there is a place for everybody. As Jesus said: “I am going to my Father’s house to prepare a place for you” (John 14.2).

The three domes on top of the buildings are fashioned according to Mughal architecture and follow the mosque style dome. The 3 domes represents the Blessed Trinity in Christianity i.e. God the Father, the Son and the Holy Spirit. When one goes to Heaven he is reunited with the Blessed Trinity.

The Balustrade on the Ramps 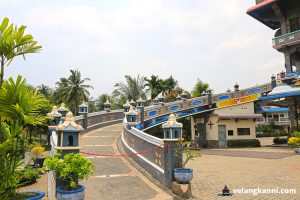 The two floors of the shrine are connected by ascending ramps and symbolically connects the earth (the ground floor) and the heaven (1st floor and above). The ramps have a balustrade that is covered with paintings of the seven days creation of man as told in the Book of Genesis, from the first until the last date of creation. On the ramps are also paintings of the birth of Jesus and his early days, and the stations of the cross that lead the path to his crucifixion.

The entire ramp is lighted by forty lamps to indicate that those who seek God will not walk in darkness, their faith will enlighten the way. The forty lamps also remind us of the journey of the people of Israel to the Promised Land, forty years of wandering through the desert. The lamps is a reminder too of the forty days of fasting of Jesus in the wilderness.

The crosses embedded on the ramps also seek to remind pilgrims that the quest to go Heaven is not easy and it is filled with trials and tribulations which must be faced and be overcomed by penance and charity. Whilst ascending to the temple of worship, the pilgrim is reminded that God made man, man sinned and was expelled, to reunite with God he must repent and if he does so, God will not let him walk in darkness and he will be saved by Jesus, his Son.

Jesus at Jacob’s Well in Samaria 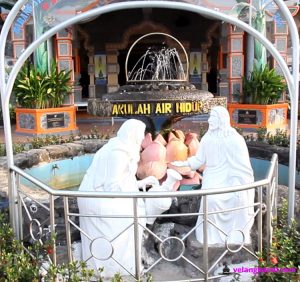 Just in front of the portico at the center of the community hall is located an attractive fountain symbolic of Jacob’s Well where the Gospel scene of Jesus meeting the Samaritan woman who came to draw water is depicted. He asked the woman to give Him something to drink from what she drew (John 4:7), and she wondered why a Jewish man would speak to a Samaritan woman – Jesus was breaking a cultural taboo because of both race and gender (John 4:9).

Jesus then offered her “living water” (John 4:10). This confused her, and she responded, “Where can you get this living water? Are you greater than our father Jacob, who gave us the well and drank from it himself, as did also his sons and his flocks and herds?” (John 4:11-12). The answer is a resounding “yes”. Jacob may have provided his children with physical water in an arid land, but Jesus is the living water that leads to eternal life. 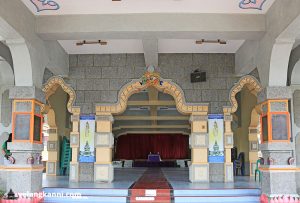 The ground floor is a community hall, and its entrance and the windows are styled with Iwans (arched entrances) typically found in mosques in Medan. The open space of the hall resemblance a musallah (prayer hall) found in mosques. The community hall is meant for meetings and other functions of the people of God irrespective of religions. It is meant for the gathering of people of faith – any faith. There are no doors to this hall and this reflects openness.The hall is named as Aula Santa Anna (St Anne’s Hall) after the mother of Mary. 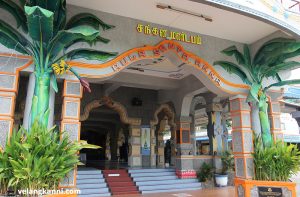 Also at the entrance of the hall there are placed 2 banana trees. Why the banana tree is chosen? Because in Indian, Karonese and also in Javanese culture, banana tree represents unending life. In cultural and festive events especially for weddings, the Indian Tamils use live banana tree to represent fertility and unending posterity of life and when giving their blessings to the newly wed they say Vazhaiyadi Vazhai (May you both, like these banana trees, be fertile and full of life to see your children and children’s children for ever and ever). Hence, they represents ‘life without end’ i.e. everlasting salvation to all those who seek refuge in the Lord Jesus. 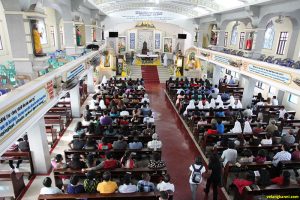 While the ground floor is the symbol of earth where people of all faith gather in brotherhood, the upper floor is the Church proper – a place for prayer and veneration.

The church in the context of the structural buildings is not necessarily for sinners but a place where those who seek to know God go to renew their commitment to God and fellowship, share the gospel. Never feel unworthy of worshiping God in repentance and faith with your fellow believers, because Jesus welcomes you to His table. By trusting in Jesus’ righteous sacrifice on the cross for our sins, we can gather together to strengthen and encourage each other in our faith, so that we can continually strive towards becoming “perfect, therefore, as your heavenly Father is perfect ” (Matthew 5:48).

The Building is Supported by Twelve Columns. 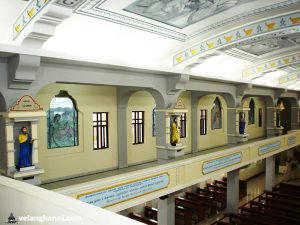 The whole shrine building rests on twelve columns. This is a symbol of Christ’s Church that was built on the foundation of the twelve apostles. So on each column the statue of one of the apostles stands as its guardian.

In Revelation 21:14 we are told that the twelve foundations of the wall of the New Jerusalem will have in them the names of the twelve apostles. It is evident, therefore, that God attaches great importance to these 12 men that followed Jesus. The statues of the 12 apostles can be seen once you are in the upper floor church.

In the four corners of the Church there are statues of angels.

Video – The Architecture of The Graha Maria Annai Velangkanni