As the first non-Italian pope in more than 450 years, he went on to become one of the most familiar faces in the world, visiting more than 120 countries in a 27-year pontificate that earned him a reputation as an international fighter for freedom. He died aged 84 in 2005 after a long illness. He was beatified – the penultimate step towards sainthood – in 2011. 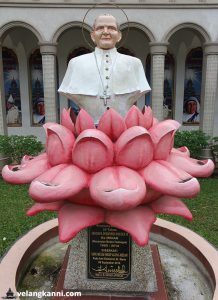 The world has known him as a person who was much devoted to Our Lady. A monument in honor of Pope John Paul II was built within the shrine complex. A bust of Pope John Paul II is placed in front of the monument, and its simple composition correspond to the personality of the pontiff known for his modest and simple attitude to people.

The monument is filled with the paintings when Pope John Paul II came to Medan, Indonesia on 13 October 1989.

The building of this monument has a story. The nanny, a Chinese national, of the family from Singapore, who was the largest single contributor towards the building fund of Graha Maria, had visited the Graha in 2004 with the family. She was so impressed with the Graha and felt a calling from within to be a Catholic. She was subsequently baptized in the Graha and was named Theresa Yap Lian Ho. Upon her death, the family found out that she had, in her will, bequeathed her entire life savings amounting to USD 30,000 to the Graha Maria. This money came at a timely moment and was used to fund the building of the monument. A plaque of appreciation is placed in the monument in honor of Madam Teresa Yap Lian Ho.

Pope John Paul II visited Indonesia for five days, from 8-12 October 1989, visiting Jakarta, Jogjakarta, Maumere (Flores), Medan and also Dili (East Timor). During the visit the Pope presided over Mass and had a dialogue with more than one million people.

The first Mass took place at the Senayan Main Stadium (now called Gelora Bung Karno), Jakarta, attended by approximately 120 thousand Catholics from the Archdiocese of Jakarta and dioceses of Bogor, Bandung and Purwokerto. In Jogjakarta, the Mass was attended by 250 thousand people from Semarang Archdiocese, Surabaya Diocese, and Malang Diocese. Then the Mass at Maumere was attended about 300 thousand Catholics from Flores and in Medan over 100 thousand people.

In Dili (East Timor – at that time still the 27th province of Indonesia) was attended by 400 thousand people.

In addition, the Pope also held a special meeting with the laity and Indonesian Catholic intellectuals at the Atma Jaya University campus, Jakarta where he gave them the message of the Good shepherd, and inaugurated the new building “Karol Wojtyla”.

On the right to the monument is a children’s park that showcases a mini Bethlehem. Pictures of Jesus with children are shown prominently. We all know that Jesus loved children very much.

The Bible passage referring to this is Mark 10:13-16. People were bringing little children to Jesus to have him touch them, but the disciples rebuked them. When Jesus saw this, he was indignant. He said to them,

Kids of all ages will enjoy this special area and is a perfect place for the young ones to worship, know and serve God.