It’s very normal to get confused due to the mixed characteristics on the outer appearance of the shrine. However, as you enter into the building, it’s totally a different image. It’s a Catholic church , not a Buddhist temple. The interior of the church is fully studded with relief, paintings and ornaments and is a feast for the eyes. Upon entering the Church you will be greeted by the Lord with warm word: “Come to Me, all you who work hard and who carry heavy burdens and I Will refresh you” (Matthew 11:28). Very meaningful words and very peaceful environment. 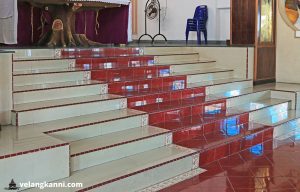 To ascend the altar there are eight steps, symbolizing the Eight Beatitudes, which are the very essence of Jesus’ teaching in the Sermon of the Mount (Matthew 5:3-11) that have to be proclaimed from the altar. So it will be clear that the faithful who come here don’t come only to pray but also to hear God’s word. The Beatitudes are written on the wall in 4 different languages (Indonesia, English, Tamil and Mandarin) so that when people leave the church they can carry home with them for reflection and for living. 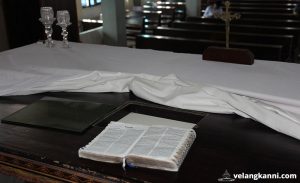 The Altar table that is used for the Eucharistic celebration is truly unique to reflect Kalpa Taru (the tree of life). The tree is a reminder that, as the death of the human race to sin came from a tree (Adam and Eve ate the fruit of the forbidden tree and was evicted from Paradise), new life was also given by the crucifixion of Jesus on a cross derived from a tree. The Altar table is the tree root that resembles the crucified Jesus which depicts the ultimate sacrifice he made to save the world, and he partakes in the celebration of the Mass (the banquet) to commemorate the sacrifice of this body and blood through death, and the victory over Evil by his resurrection.

The Bible that was miraculously undamaged in the fire that destroyed Father James’s room is displayed on the altar table in an embedded glass showcase.

The Backdrop of the Altar

The backdrop of the altar itself is decorated like a kingly throne. This is deliberately so, because the Lord invites his people to sit on the thrones in his Kingdom. The Catholic tradition teaches that there are three different comings of the Lord, which include the history, mystery and glory, all of which play a different but important role in the faith. At Christmas, we celebrate the historical fact that the Son of God became flesh and was born for our salvation. That’s the history. We relive that. We celebrate Christmas. It happened, and it affects us still. He comes in glory at the end, and we talk about that all the time in the words we pray right after the consecration of the Mass. But it’s that middle line – the mystery, that this altar focuses. 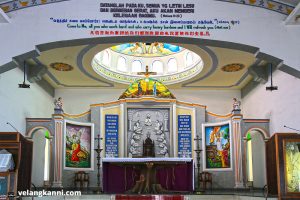 In the background there are engraved three pictures that explain the meaning of the altar. On the left side you see Abraham’s sacrifice of his son and on the right side the priestly offering of our gifts of bread and wine by the high priest Melchizedek. In the middle is the picture of the Last Supper which is to remind the parishioners that the celebration of Mass that takes place at the Altar is one of sacrifice and a banquet. The painting is an Indian version of the Last Supper where Jesus and his disciples are sitting cross legged in the Indian fashion.

The Hebrew word for altar comes from a verb meaning “to slaughter for sacrifice”. In the liturgy of the Roman Rite of the Catholic Church, the altar is the table on which the Sacrifice of the Mass is offered. The Eucharistic celebration is a memorial of Christ’s sacrifice on Calvary, and hence the scene of Calvary is seen above the picture of the Last Supper.

The scene of Calvary depicts Mary, the Mother Jesus and John, the beloved disciple of Jesus, standing at the foot of the cross and Jesus handing over His Mother to the world and makes her the Universal Mother (John 19:26-27, Mother, behold your son; behold your Mother). This is one of the reasons why the Church hold her on high esteem and have great devotion to her.

Above the altar, inside the vault, you see triple engravings describing the scene of the second coming of Jesus, his Parousia and the Last Judgment in the middle, on the right is the famous painting of Michelangelo of the first human being, created by God, namely Adam and on the left side you see the first human being glorified by God, namely Mary – the Queen of heaven and earth.

Here again you can see how Mary is the model of every human being. As the final goal of the creation of man/woman is for him/her to enter into the Glory of God, and since Mary, one of the human race had already reached that glory, proving that it is not impossible for human being to reach the glory of God through His grace. There is nothing strange or wrong for Catholics to come to her to learn from her and also to ask her help for their reaching that glory.

Sides of the Altar

On the left of the altar stands the beautiful statute of Our Lady of Velangkani. This is the statute that miraculously found its way to Medan on the day the foundation stone was laid for the building of Graha Maria. This statute portrays Mary as the model of every human being and how She can lead us to God if we intercede to her. Beside Her statute is a small altar where the Holy Bible is placed.

On the right is the Tabernacle in the form of the Sacred Heart of Jesus.The Sacred Host is kept in the Tabernacle to remind the faithful, the true and real presence of Jesus in the Sacrament of Eucharist till the end of the world just as Tabernacle the Israelite carried the presence of Yaweh in their sojourn towards the Promised Land.

The Bible placed next to the altar of Mary and the Tabernacle on the other altar speak of the mystery of the Word of God becoming flesh in Mary, and dwelling among His People in the Eucharistic Bread as Emmanuel “God with Us”.

Video – The Altar Backdrop of the Graha Maria Annai Velangkanni