Apart from the magnificent architecture, there are interesting pieces of artwork and views inside the church. Amongst the interesting interior details are the huge statue of Annai Velangkanni, the statues of the 12 apostles – which are connected to the 12 pillars of the building and the decorations and paintings on the walls and ceilings.

The interior colors of the Graha Maria Annai Velangkanni mirrors the colors you see in stained-glass patterns. These colors usually represent liturgical traditions and Christian doctrines. Violet/Blue shades represents royalty and reminds worshipers of the kingly office of Christ. Red represents the presence of the Holy Spirit and is the most traditional color of the Church. Bright green represents new life while olive green is neutral.

They produce a feeling of warmth and welcome, and accentuates different focal points – the altar backdrop, the altar dome, ceiling and the stained glass window. The effect is an overall sense of brightness and peacefulness in the space.

Statues of the Apostles

The whole shrine building rests on twelve columns. This is a symbol of Christ’s Church that was built on the foundation of the twelve apostles. So on each column the statue of one of the apostles stands as its guardian. In Revelation 21:14 we are told that the twelve foundations of the wall of the New Jerusalem will have in them the names of the twelve apostles. It is evident, therefore, that God attaches great importance to these 12 men that followed Jesus.

On the entrance to the church on the upper floor you will notice two huge statues of St. Paul and St. Francis Xavier. They too are called apostles in a special sense for apostolic achievement. St. Paul is the Apostle of the Gentiles, while the Spaniard St. Francis Xavier, a co-founder of the Jesuit Order, worked in the Indonesian islands from 1546 to 1547, and baptized several thousand locals in Ambon, Ternate and Morotai (Halmahera) and is honored with the title Apostle of Asia. Hence they are placed outside of the church.

Artwork on the Ceiling

Inside the church, there are artwork on the ceiling. There are beautiful paintings of six of the Sacraments on the ceiling reminding Catholics of the doctrine of Seven Sacraments – Baptism, Reconciliation, Confirmation, Marriage, Anointing of the Sick, Priesthood and the Eucharist. However, the sacrament of the Eucharist is not shown on the ceiling as it shown as the background of the altar. On the ceiling are also pictures of the miracles that took place at Velangkanni, India. 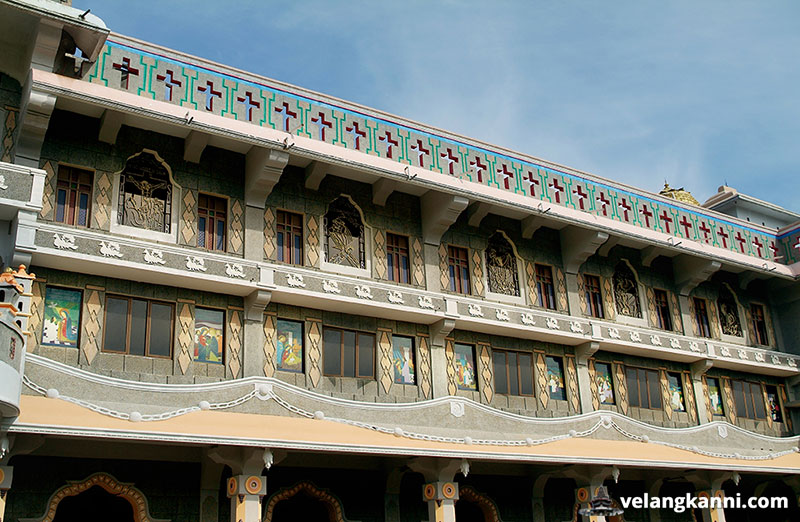 On both sides of the church along the balcony there are stained glass windows depicting the mysteries of the Rosary – the powerful prayer of the Blessed Virgin – the Joyful, Glorious, Sorrowful and Luminous mysteries. This stained glasses are also visible once you are inside the church.

Stations Of The Cross

The 14 stations of the cross are also depicted in a wire mesh above the stained glass, showing the sufferings of Jesus to gain Salvation for mankind. 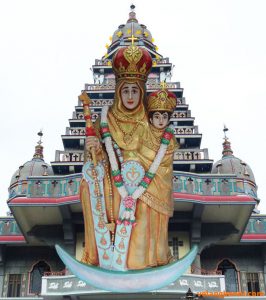 On the third floor of the Shrine you will find a beautiful statue of Our Lady of Velangkanni holding the Child Jesus as she appeared in the village of Vailankanni in India draped in a Indian Sari. This eight feet high statue of Mary is a fine piece of artistic excellence and is the chief object of veneration and source of inspiration for the people.

Our Lady of Velangkanni is perceived as just one representation of the Virgin among many others. At the same time, however, she is considered independent and unique. Mary, Mother of God is the mother of all generations, and she embraces everyone, without any discrimination of caste, creed, religion and language.

While we approach her, all that we need to possess, is true faith and selfless love in her and her son Jesus.

Apart from its unique blend of Indo-Mughal architecture with its religious symbols and biblical content the majestic looking Graha Maria Annai Velangkanni is also ‘a beauty that will be a joy forever’ with the harmony of its rainbow colors.

Initially the main purpose of painting the Graha Maria in multi colors was to attract the attention of the passers-by. But amazingly enough it seems that it is God, the real architect of the Graha Maria, who seemed to have chosen the seven colors of the rainbow (in the Bible it was the sign of God’s covenant with Noah that he would not destroy the world anymore with flood waters) which is a sign of hope and had so arranged them in an ascending order as to reveal His grand plan of Salvation of the human race.

Through its seven rainbow colours, the Graha Maria proclaims the message of the Gospel, namely, “how sinful men and women, who are called to holiness, can through true repentance inherit God’s divine life by giving up one’s sinful life through self sacrifice and as a result, can have the right to enter heaven in order to be glorified by God in His eternal glory.” In short, Graha Maria Annai Velangkanni remind everyone who visits this site of the very purpose of creation and of human destiny, namely:” HUMAN BEINGS ARE CREATED FOR THE GLORY OF GOD”. 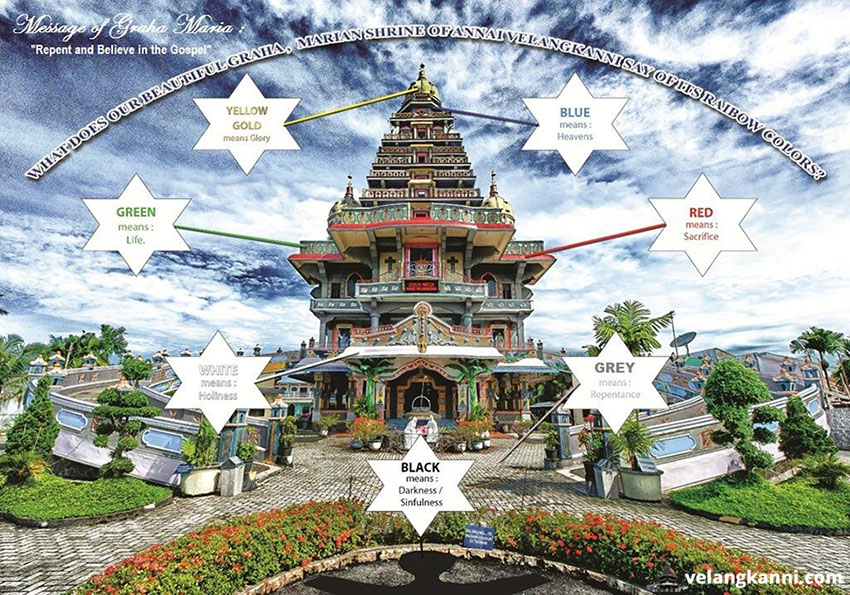 As it turned out, it is only at the end of 2011, almost seven years after the original painting of this colorful shrine Father James discovered a profound meaning of the colors that are used on the building and their significance in the journey of Man from Darkness to the Glory of God:

Everywhere around the Graha Maria you will find most of the information are written in four languages. Information such as bible quotes, signs, events, etc. are written in Bahasa Indonesia, English, Tamil and Mandarin. These four languages are used very widely in South East Asia and helps the visitors feel at home.

Video – Statues and Relief In The Graha Maria Annai Velangkanni